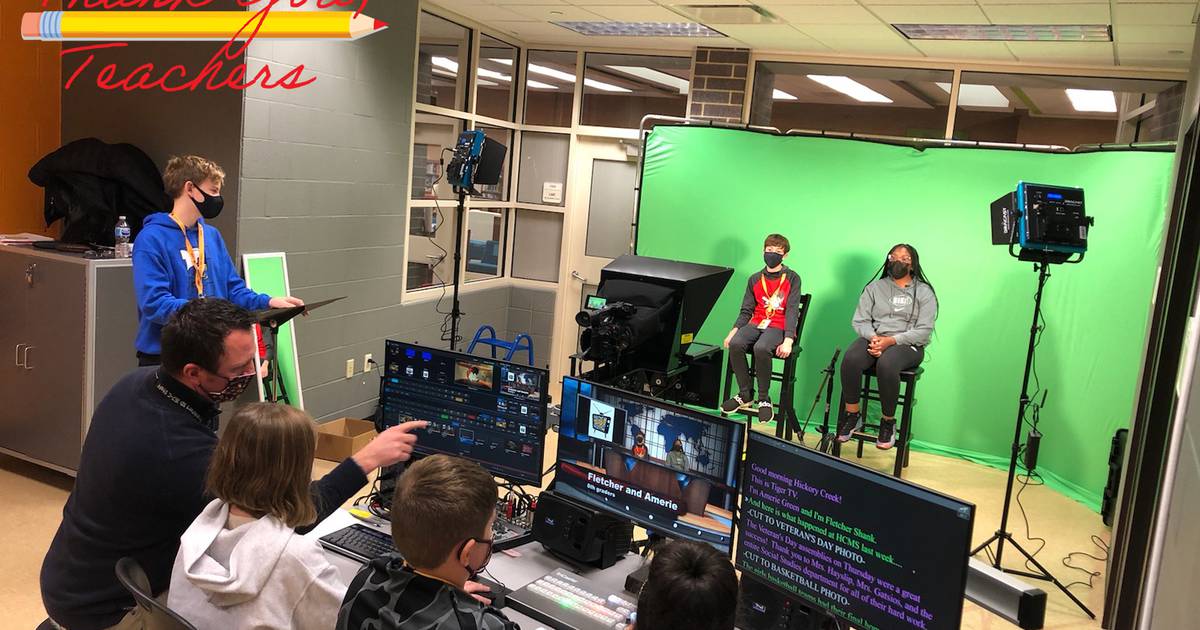 Some people stay in touch with their community through traditional and social media.

But everyone at Hickory Creek Middle School stays in touch with that community through Tiger TV, a new club in Hickory Creek where nearly 50 sixth, seventh and eighth graders produce weekly 10-minute newscasts.

“It’s more than knowing how to produce,” said Hickory Creek teacher and Tiger TV co-sponsor Dave Wonder. “It’s more about knowing how to work in a team, how to set goals, how to achieve goals and develop a skill set.”

In an email, Wonder said he and Allison came up with the idea after visiting another college with a similar curriculum. The production studio was funded by a grant from the Frankfurt 157-C Education Foundation, according to a District 157-C press release. The space includes “green screens, cameras, lights and other production equipment,” the statement said.

The students are divided into four production teams and “alternate weekly between shooting in the studio, broadcasting district events live, and producing featured segments for the newscast,” Wonder said. This gives students multiple layers of experience and frees them up to participate in other extracurricular activities, he said.

But Tiger TV not only gets kids excited about Wonder’s video and production lessons, but also helps kids find their passion, which is important to him, Wonder said. He envisions the studio being used beyond newscasts: seventh-grade science weather projects, eighth-grade Spanish homework, drama club presentations and ELA class projects, he said.

“I will do anything to get kids engaged and motivated to learn,” Wonder said. “I really feel like our job is just to provide them with opportunities for growth.”

According to Wonder, a Tiger TV newscast is produced using the following steps:

2) The production team decides what information to cover in the newscast and which teacher will deliver the “Joke of the Week”, as well as other features.

4) The scriptwriter and researcher gathers the scores of the sporting events of the week. They check with the office for important announcements and the school calendar for any upcoming events. They write seamless transitions between the different features featured in the newscast.

5) The newscast graphics are designed with PowerPoint.

6) Feature content is pre-recorded. Content for the feature includes images and b-roll video while a narrator reads a script on or off camera. Subjects must be interrogated. Content should be written concisely.

7) The camera operator ensures the lights and mic are on, the camera is focused on the talent, and the talent is picked up by the mic.

9) The two anchors rehearse their script and work out their pronunciations and rhythm.

10) The Tricaster operator and attendant load the show media onto the Tricaster computer. This media includes promotional videos, outro and end credits. These operators ensure that the media are in order according to the script. They repeat transitions and timing.

11) At least three takes of the entire program are recorded.

12) A sponsor or student editor will export the recordings and edit the footage to include the best of the different takes.