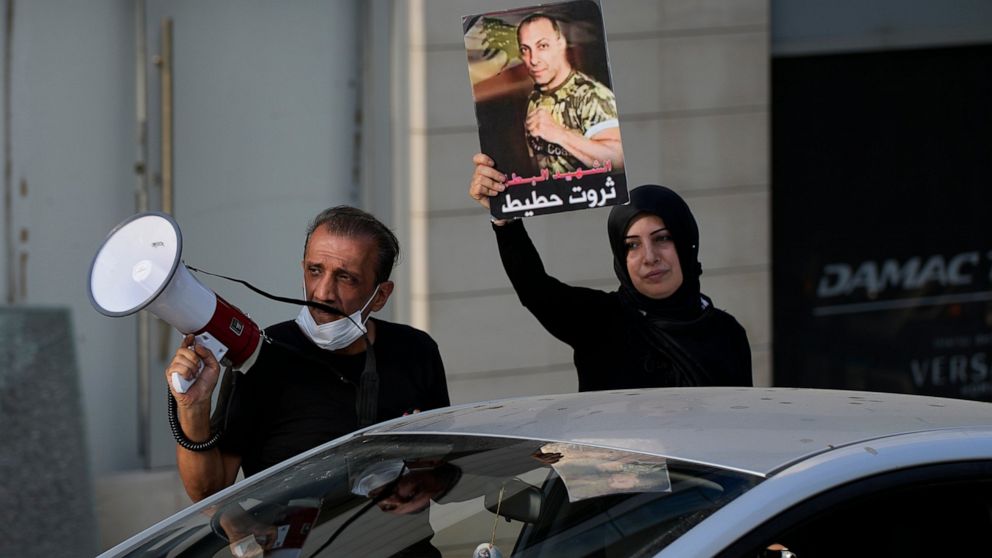 After the explosion in Beirut, winning justice becomes the mission of a lifetime

BEIRUT – After the massive explosion in the port of Beirut a year ago, only a small part of Ibrahim Hoteit’s younger brother has been identified: his scalp. Hoteit buried his brother – a tall man, a firefighter, a martial arts champion – in a container the size of a shoebox.

Since then, Hoteit has sold his business, a perfume and accessories store. He only sleeps a few hours a night. Dark circles surround his eyes.

One thing is now motivating him: to obtain justice for the victims of the explosion of August 4, 2020 which left more than 214 dead and to punish the Lebanese political elite, accused of having caused the disaster through its corruption and mismanagement.

“I don’t see a minister, president or speaker of parliament. I see the person who killed my brother and others with him, ”said Hoteit, who says he received anonymous threats. “That’s what gives me strength. I see I have nothing to lose.

Hoteit and his wife, Hanan, have built an association of more than 100 families of those killed. They are waging a campaign of protests and rallies trying to shame, pressure and force politicians to let the truth come out.

A year later, critics say political leaders succeeded in blocking the judicial investigation into the explosion.

President Michel Aoun said no one would get political cover if found negligent or guilty, but did not respond to accusations that officials are obstructing the investigation.

Hoteit and other families say they face not only a government, but the political system that has ruled Lebanon for more than 30 years. It is a system that protects itself so intensely that it seems invulnerable, although many Lebanese say it has driven the country to ruin, highlighting both the explosion and the financial collapse which is one of the worst in the world in the past 150 years.

Even the current interim prime minister, Hassan Diab, acknowledged this, claiming weeks after the explosion that corruption in Lebanon “is greater than the state”.

Black and white portraits of each of the victims of the explosion, commissioned by Hoteit’s group, hang on the walls of a central plaza near the port. Painted on a wall in front of the still mutilated port, a large slogan reads: “My government did this.

The explosion was preceded by a fire that broke out in the harbor, and hundreds of tons of ammonium nitrate stored in a hangar along with other highly combustible materials exploded.

It was one of the largest non-nuclear explosions in history. In addition to the dead, thousands of injured. Some 300,000 houses were damaged or destroyed.

It quickly emerged in documents that ammonium nitrate had been stored inappropriately at the port since 2014 and that several high-level officials over the years were aware of its presence and did nothing.

But a year after the government launched a judicial inquiry, almost everything else remains unknown – from who ordered the expedition to why officials ignored repeated internal warnings of the danger. Several government agencies have a role to play in the port, but all have said ammonium nitrate is not their responsibility.

Hoteit’s brother Tharwat was among the group of firefighters who rushed to fight the initial blaze. All were killed.

Hoteit and his wife spent the next 12 days searching for her brother in hospitals. It was heartbreaking. They turned the bodies over to see their faces. Doctors informed them when they identified Tharwat’s remains.

Along the way, they met other families on the same gruesome search. Hoteit and Hanan saw a man carrying his dead son’s hand in a plastic bag. Families continued to communicate, first through a WhatsApp group, exchanging the stories of their loved ones.

Then they organized to fight.

With her black tee shirt, jeans and slicked back hair, Hoteit has become synonymous with calls for justice. The 51-year-old father of three is ruthless, determined – and a lucid strategist.

He coordinates with local groups to document and archive every piece of information about the explosion. He has met several of the politicians he has led protests against, as well as investigators on several occasions.

In the beginning, the group organized vigils outside the port on the 4th of each month. But as the investigation stalled, the group shifted tactics, targeting specific officials with protests.

During a protest last month, hundreds of people carried empty coffins outside the home of the acting interior minister.

At first, Hoteit tried to keep the group in order, while Hanan and others angrily yelled at the Minister inside. The protest became tense as the number grew and the minister never came out to speak to them. Protesters tried to force their way through the gates.

The police fired tear gas and pushed them back.

The biggest challenge has been trying to move the investigation forward.

The first principal investigator was Fadi Sawwan, a former military judge. When families felt he was dragging his feet, citing coronavirus restrictions, they protested outside his home.

When he acted, they couldn’t protect him.

Sawwan named three former government ministers and Diab, the acting prime minister, to be charged with negligence leading to death. Diab dismissed the allegations as “evil”. The political class united and obtained the dismissal of Sawwan by court order in February.

It was then that families staged their first angry rally, burning tires, blocking roads and warning they could storm the Justice Department. A replacement for Sawwan was quickly appointed: Tarek Bitar, a younger judge with no clear political affiliation.

Bitar has cast a wider net, even pursuing senior military, intelligence and security officers. In February, he called on the government and parliament to lift the immunity of heads of two major security agencies and two lawmakers so he could question them.

The families were delighted.

But the political elite closed ranks again. Lawmakers and government officials refused to waive immunity. The Home Secretary said his legal department advised against it, apparently because the security agency in question was not responsible for the shipment.

Families have therefore attacked parliamentarians and officials whom they accuse of burying the truth. In television commercials and social media posts, they called those who opposed the lifting of immunity “ammonium nitrate lawmakers.”

The same group of politicians have ruled Lebanon since the end of its long civil war in 1990.

They lead the same entrenched sectarian factions that fought the conflict. They divided government offices among themselves and their patronage system fomented widespread corruption.

Dozens of political assassinations have never been thoroughly investigated. Corruption has gone unpunished despite extensive documentation.

Impunity is ingrained in the system. Although rivals, the factions are closing ranks to prevent accountability.

This impunity translated into staggering cruelty on the part of politicians in the aftermath of the explosion.

No one has deployed security around a city in chaos. No authority took charge of the crime scene or search and rescue. No politician visited the damaged areas. No state agency offered aid or shelter to the homeless, and none cleared the rubble – everything was left to the volunteers.

The state has never offered an apology or condolence to the families. Even declaring August 4 a national day of mourning took months of pressure.

“The state didn’t care about anything at all. If we didn’t follow everything, big and small, nothing would happen, ”Hoteit said, speaking at his home in Dahiyeh, a predominantly Shiite suburb in south Beirut.

Like many Lebanese, Hoteit had long since resigned himself to the system. It was dictated by fate and geopolitics, he said.

He can’t take it anymore.

“If justice does not give us our right, I will take revenge on my brother with my own hands. “

The lives of families have been consumed by the struggle for responsibility.

Salam Iskander, a mother of four whose younger brother Hamzeh was killed, comes from her home in northern Lebanon to Beirut to participate in all the activities organized by the group. Her father was furious, saying she was putting her family in danger by attacking politicians.

The memory of his brother animates him. Hamzeh, a soldier, supported her and her children because her husband has a disability that prevents her from working. Her mother died a few months after Hamzeh – killed by grief, Iskander believes.

“Hamzeh will not come back. Nothing will cool my heart, ”she said. “But I want to be able to say that I did something for him. …. Maybe I can do something as simple as punish those who did.

Tracy and Paul Naggear lost their only child, Alexandra, 3. Lexou, as they call her, was one of the youngest killed in the blast.

They cannot bring themselves to return to live in their house near the port. Tracy lost weight from stress. After Lexou’s funeral, they considered leaving Lebanon – Tracy has Canadian citizenship – but then began to work with other justice activists. Now, they regularly participate in Hotit protests.

“This government killed my daughter, and it is my right and my duty to seek justice, and I will,” said Tracy. “They can try to block out the truth as much as they want … They’ll be exhausted before we do.”

The Naggear are also part of another network of families calling on the United Nations Human Rights Council to establish a mission to investigate the blast. Supporters are hoping it could bypass politicians’ obstructions.

A third group, made up of families of killed firefighters, focused on lobbying Lebanese security agencies.

Families have had to fight again and again for the slightest help to the victims.

Parliament stagnated when it called for the victims to be considered military martyrs, which would guarantee them and their families a pension and assistance. Hoteit therefore called a strike in front of the home of Speaker of Parliament Nabih Berri.

Ultimately, they won the declaration. But Hoteit said the speaker’s allies within the government social insurance agency, feeling aggrieved by the protest against Berri, responded by slowing the delay in payments to the injured. Hoteit therefore organized a press conference to name and humiliate those responsible. Payments have resumed.

On Monday, Hoteit and the families gave officials 30 hours to lift the immunity of officials the lead investigator wishes to interview – or face a “overwhelming” response. They didn’t elaborate.

Breaking the wall of impunity means more than delivering justice, says Hoteit. Internal calculation may be the only way to break the system.

“If that doesn’t make a change, nothing will. “

Cash boost to create a new flexible approach to learning