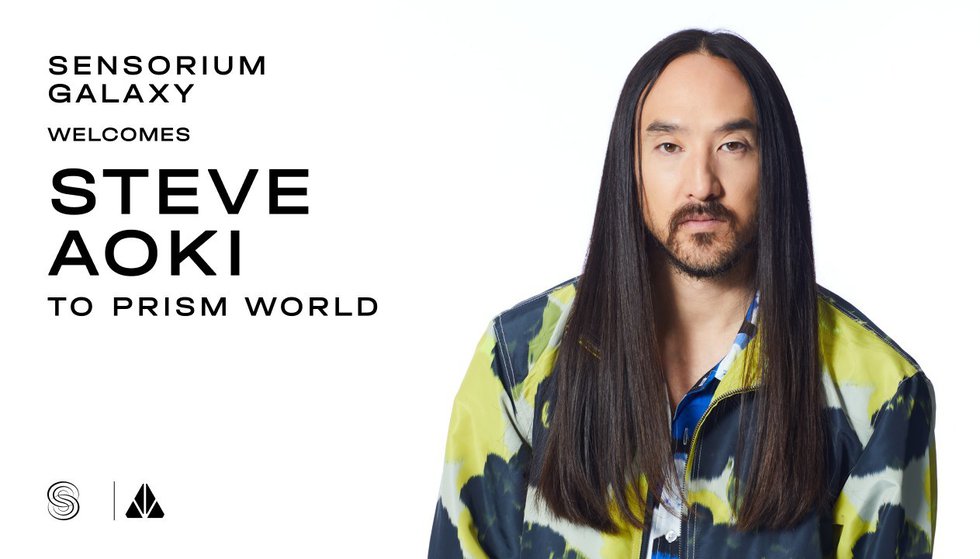 Aoki is set to create a series of exclusive shows in PRISM – a futuristic world within Sensorium Galaxy, where the environment is transformed under the influence of sound frequencies. The artist will perform as a photorealistic avatar, produced using cutting-edge motion capture and 3D scanning technologies.

With more than 4 billion music streams to its credit, Steve aoki is a true visionary and one of the most requested artists in the world. Consistently ranked among the top 10 DJs in the world and beloved by audiences for his high impact and experiential live performances, he holds the Guinness World Record as the most traveled musician for having performed 168 shows in 41 countries in one year.

A true renaissance man, Steve aoki is also a fashion designer, author and entrepreneur known for his fascination with technology and science fiction. In 2012, he founded THE AOKI FOUNDATION, which primarily supports organizations in the field of brain science research with a particular focus on regenerative medicine and brain preservation. Incorporating these themes into his shows and music, Aoki has dedicated a series of albums – Neon Future – to human relations with machines, with the latest album Neon Future IV exploring themes of biotechnology and digital immortality.

Steve aoki: “Metaverse is an ideal playground for exploring human interaction with technology. In Sensorium Galaxy, the social mechanisms of meeting and befriending other viewers interact closely with an ever-changing environment thanks to AI. This opens up a whole new level of entertainment for both artist and audience. I am delighted to share with fans this immersive experience at the intersection of music and science fiction “.

In addition to creating virtual shows for PRISM, Steve aoki is also being Featured in Sensorium Galaxy’s international reveal campaign ‘The Chosen Ones’. His episode, which premiered today, was shot in Los Angeles earlier this year from Oscar-winning studio The Mill and acclaimed creative agency High Scream. It features Aoki meeting the massive portal that transfers chosen artists from Earth directly to the PRISM world of Sensorium Galaxy.

Sasha Tityanko, Deputy CEO of Sensorium: “Sensorium Galaxy is an unprecedented platform, which allows visionary artists like Steve to experience the symbiosis of technology and human creativity. As one of the hardest working and most innovative DJs, Aoki never fails to deliver high-energy shows. We are too excited to see where his creativity and true fascination with futurism will take him within the virtual worlds of Sensorium “.

Steve aoki will join a stellar roster of artists, who have already confirmed their participation in Sensorium Galaxy. Among them are David Guetta, Carl cox, Armin Van Buuren, Eric Prydz and other DJs topping the charts.

A true open experience, the Sensorium Galaxy shows will be accessible via the most widely available interfaces. Users will be able to connect while wearing a VR headset, using PCs, or streaming the performance with their Macs or mobile devices.

Sensorium Galaxy is now in beta and is expected to launch later in 2021.

Photos and videos are available in the Sensorium press kit

Sensorium Galaxy is a digital metaverse showcasing high-end immersive events and experiences. In this alternate reality, users can reinvent themselves, explore vast virtual worlds filled with activity, ranging from games to mediation practices, socialize with others, and interact with their favorite artists.

Sensorium merges the best of technology and entertainment. It was developed by veterans of the gaming and virtual reality industries in partnership with entertainment powerhouses such as Roc Nation by Jay-Z and The Night League by Yann Pissenem.

Founded in 2018 with the sole backing of billionaire Mikhail Prokhorov, listed on Forbes, Sensorium Corporation oversees the technological and business development of the Sensorium Galaxy platform and provides it with a wide range of events and experiences through content partnerships. leading global companies.

Since its founding, Sensorium Corporation has raised more than $ 100 million in private investments, making it one of the best-funded virtual reality startups in the world.

Here’s how to start your own social media marketing agency

Here are the companies that Apple’s advertising changes are hurting, and those that can withstand the pain