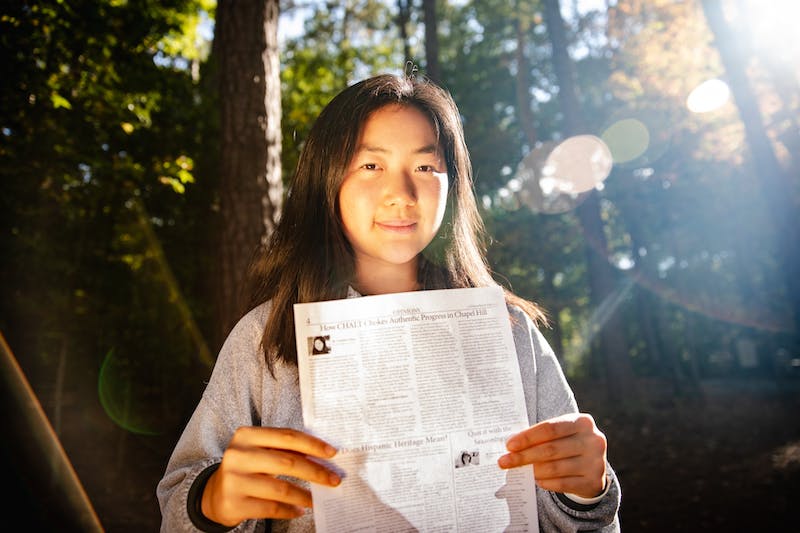 Last Thursday I attended an online event called “What is CHALT?” ”

The event, hosted by the Chapel Hill Alliance for a Livable Town, also known as CHALT, brought together members of the organization who spoke on a variety of topics. The discussion focused on smart growth, transportation planning and stormwater management.

The organization decided to host the event as they have been the subject of several recent articles by local news outlets, including the News and Observer, IndyWeek and even the high school paper East Chapel Hill Observer (ECHO). Each of these articles criticized the organization’s role in city politics, calling them “the epitome of moderate liberalism,” which prioritizes the preservation of the past.

ECHO Co-Editor-in-Chief Caroline Chen got the idea to write the article “How CHALT Stifles Genuine Progress at Chapel Hill” when she saw a door hanger announcing CHALT’s approvals for Chapel Hill City Council.

The leaflet featured panoramic images of the city and indicated that CHALT was committed to taking bold action against climate change, encouraging responsible development and providing a mix of housing.

“It’s literally the antithesis of everything I know about their organization,” Chen said. “Everything I’ve heard about them, I know that’s not what they do. It is important to let some people know that everything is not like this on paper and that CHALT is.

His article clearly describes the dissonance of CHALT in its definition of “habitability”.

“You keep hearing about CHALT… find out who we are and what we do,” they said in a promotional flyer for the event. “Since 2014, CHALT has proven itself by advocating for transparent local government, responsive elected leaders and a greener and more livable Chapel Hill. “

I listened to the 23 other participants in the meeting introduce themselves. The overwhelming majority of people who did were usually whites 65 or older – who were themselves members of CHALT. I was the only student (and maybe the only one in my twenties) present.

Some had lived in Chapel Hill for decades, others for only a few years, but one thing was constant: they were proud of the work for a “livable” city that CHALT helped create.

These “achievements”, as CHALT has defined them, do not create habitability for everyone. The organization’s anti-development policies only serve people wealthy enough to already own a home here.

Chen’s article was a review of the ways in which CHALT advocates for policies that directly oppose their stated goals, particularly how they make Chapel Hill less livable. It was a well-researched opinion piece by a high school student engaged in society.

But rather than embrace the dialogue and welcome young people into the local political conversation, CHALT co-founder Julie McClintock attacked Chen in a letter to the editor and called her arguments “unfounded.” and “total idiocy”.

“I was a little shocked when I received the email,” Chen said. “I was like ‘Oh my God, what if I made all these mistakes?’ I felt really guilty.

But the more Chen looked at the facts she had written about in her article, the more she realized that she had nothing to worry about. Chen said in hindsight that he felt like the leadership of CHALT was trying to enlighten him because of his youth.

“A lot of the points she raised, the facts were actually more on my side than hers,” Chen said.

After receiving McClintock’s email, Chen posted a piece of response where she explains her research in detail and explains where CHALT was incorrect in her reading of her work.

Along with its anti-development rhetoric, constant urban turmoil, and NIMBY-style policies, CHALT quickly rejects criticism and uses divisive tactics to advance its agenda.

You would think that a civic engagement group in a college town would try to garner support from the young people who inhabit Chapel Hill. Instead, they dig in and oust voices that don’t agree with their quaint take on what Chapel Hill should be like.

We need more young people like Chen to get involved in local politics and care about what is going on off campus. We are all members of this community and if we are to see this city thrive and become as progressive as we say it is, then we have to start paying attention.

It starts by holding neighborhood organizations like CHALT accountable for their lack of transparency and division.

Right now, the most important action we can take is to vote in municipal elections. Vote for candidates who advocate for dense housing, multimodal transport, and a fair policy to close the achievement gaps.

CHALT’s voices have disproportionately affected the local political debate for far too long – and their attacks on young journalists must not silence the desire for progress in our city.

To receive the news and headlines of the day in your inbox every morning, subscribe to our email newsletters.