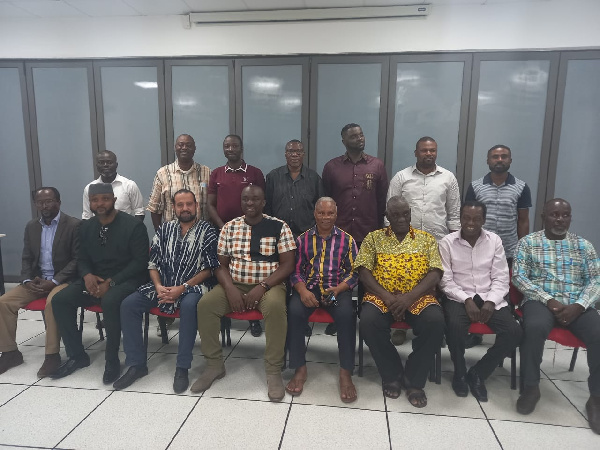 The management of Imax Media Group, led by its Group Director, Mr. Fadi Fatal, has engaged the members of the Ghana Boxing Authority (GBA) Board of Directors on various issues related to the upcoming Professional Boxing League series.

February 5, 2022 has been designated as the first night of the Ghana Professional Boxing League.

The big event is set to take place at the Bokum Boxing Arena in Accra and be broadcast live on Max TV with global live streaming as well as updates via affiliate media.

Mr. Fadi Fatal was accompanied by a team of heads of Television, Radio and Internet departments at Imax Media Group who took the time to outline the framework of the project.

The two key partners deliberated for hours on the dynamics and responsibilities of the launch and beyond.

Additionally, structures on the type of support required from the GBA and all other boxing league stakeholders were spelled out.

Mr. Fattal explained the dynamics of content development, production, delivery and managing boxers, managers and promoters to ensure TV coverage and execution would be top-notch.

The Chairman of the Ghana Boxing Authority, Mr. Abraham Kotei Neequaye assured all partners and stakeholders that he was convinced of the huge impact the boxing project was about to have in the history of the Ghanaian sports.

The GBA President was ably supported by the First Vice President, Mr. Rabbo Dodoo, and Board Members who contributed to the discussion and provided expert input for the impending launch.

iMax officials took turns identifying relevant content and production inputs while explaining what needs to be done to elevate the project to become one of the best of its kind in Africa and beyond.

GBA Chairman Abraham Kotei Neequaye expressed his deep gratitude to Imax Media Group for such a strong commitment and then called on all stakeholders to play their part with passion and commitment for a successful project that is close to his heart.

According to him, his ultimate program for such a wonderful initiative is to help nurture and nurture credible and enduring boxers who, in the not too distant future, can bring honor to the country with countless world titles.

The collaborative efforts of the Ghana Boxing Authority (GBA) and Imax Media Group are bringing back to the boxing radar in Ghana a concept that was last seen sixteen (16) years ago.

Imax Media Group has signed a 5-year, US$1.7 million development partnership agreement with the Ghana Boxing Authority to help revive the sport and provide Ghanaian boxers with the platform to shape and nurture their talents and become long-term world champions.