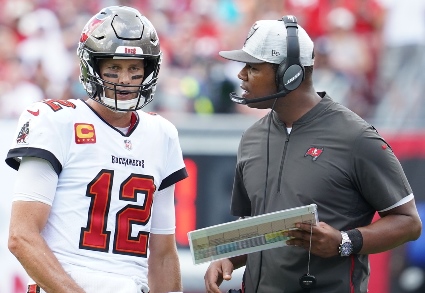 It’s a question of health… Or is it?

During a roundtable last week on the Chiefs-Bucs game, a man who covered the NFL for years for the four letters says the Bucs aren’t about to hit the panic button.

The Bucs offense was troubling like the Bucs offense when Father Dungy was on the Bucs sideline. This bothers Joe a lot because the quarterback is the greatest to ever step on a field in the NFL, Tom Brady.

The offense shouldn’t look like Dilfer with Brady at quarterback. There is something.

Joe saw BSPN NFL reporter Dan Graziano at The Licht House last week for the Packers-Bucs game. And it looks like Graziano stuck a little higher with the Bucs for information.

Speaking on ‘First Dump’ last week, Graziano claimed that despite the Bucs offense scoring less than 20 points in every game this season, no one at One Buc Palace panic.

“They believe that once everyone is healthy, everything will be fine,” Graziano said. “They don’t see any decline in Brady’s performance and ability.”

It will help. But let’s be real here: The Bucs had Mike Evans, Chris Godwin and Julio Jones all together healthy in the first half of the Cowboys game. The Bucs had just four field goals at halftime.

This offense sputters too much and Joe can’t put his finger on it. Is it really so much upheaval on the offensive line that is the cause? Is Playoff Lenny slipping before our eyes?

(For those who like conspiracy theories and connection points that may or may not exist, consider that Gronk’s girlfriend, model and TV personality Camille Kostek, is doing promotional work for a social media project of the NFL targeting women.In the spots that Kostek appeared floating around Instagram, she wears a Gronk Bucs jersey.)

There’s just something weird about this offense. And Joe isn’t quite sure it’s awkward because Godwin and Julio got hurt.