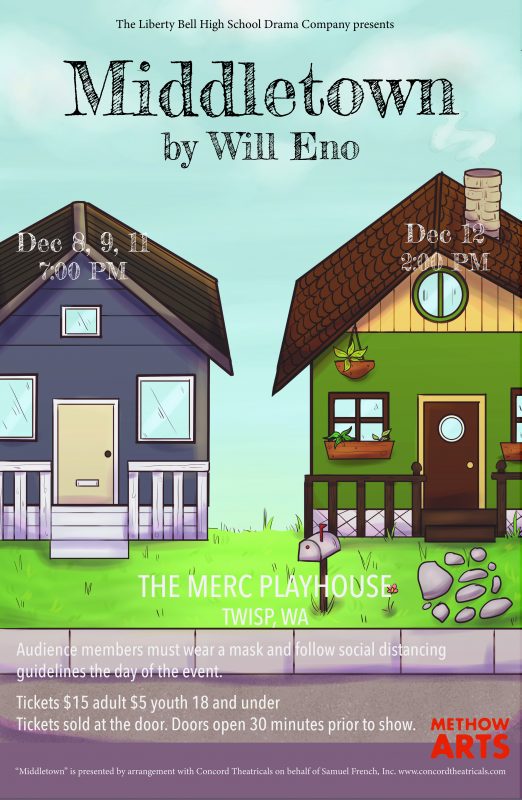 Like life in the Methow Valley – or pretty much anywhere else for the past 18 months – life in Middletown, USA can often seem surreal. This is just one of the reasons the Liberty Bell Drama Company (LBDC) chose “Middletown,” by playwright Will Eno, as their fall production.

Opening at the Merc Playhouse on December 8, â€œMiddletownâ€ explores the world of a small American town, according to a press release. As a friendship grows between longtime resident John Dodge and newcomer Mary Swanson, the lives of the people of Middletown intersect in eerie and poignant ways on a journey that takes them from the local library to space. and at intermediate points. “

â€œWe try to put together plays that challenge our students and our community in some way,â€ said LBDC and drama teacher Kelly Grayum. â€œThis piece says a lot about our modern life and certainly echoes some elements of our COVID experience, minus the masks. “

As well as featuring 20 characters with five lead roles – a size well suited to the LBDC’s 25 actor and supporting team – â€œthere are a lot of roles where the students are involved in a single scene, much like the one-acts which we have done in the past, â€said Grayum. â€œIt allows us to all be together on the same project while achieving some of the same goals as the variety show. [that the LBDC typically does in the fall]. We’ve even added live music to showcase some of our musical talents.

This year, the LBDC is made up of students from Liberty Bell High School and the Independent Learning Center. Three of the main roles are occupied by senior LBDC: Alex Eslava, who plays John Dodge; Hazel Culpsmith, who plays Mary Swanson; and Sophia Newton, who plays “Librarian,” a source of knowledge about the workings of Middletown both past and present. The other roles are filled by a combination of veterans and new members of the LBDC.

Co-director Danbert Nobacon, along with a group of five LBDC students, is focused on designing the sets, sound and light for the show. Nobacon also stages several scenes from the play. LBHS alumni Baylie Peplow mentored a student in developing promotional material for the show. Nobacon and Peplow’s Time is supported by Methow Arts’ Artist-in-Residence program.

â€œMiddletown is like any place and that’s the point,â€ Grayum said. â€œThe public will be able to see Middletown as a place but also as an idea. It all looks so familiar but also slightly fantastic. The characters in Middletown are all looking for something, but they don’t always know what it is or where to find it, even though it’s often right in front of their faces.

As is often the case when life imitates art, â€œMiddletown,â€ which opened in 2010, has strong thematic echoes in the world of COVID-19. The show deals with “the loneliness and isolation that often accompanies modern life and will seem familiar to audiences who have lived through the last two years of the pandemic,” Grayum said.

â€œThe play is very funny but also painfully sad at times,â€ he said. â€œThe public will feel the weight and the beauty of the human being. “