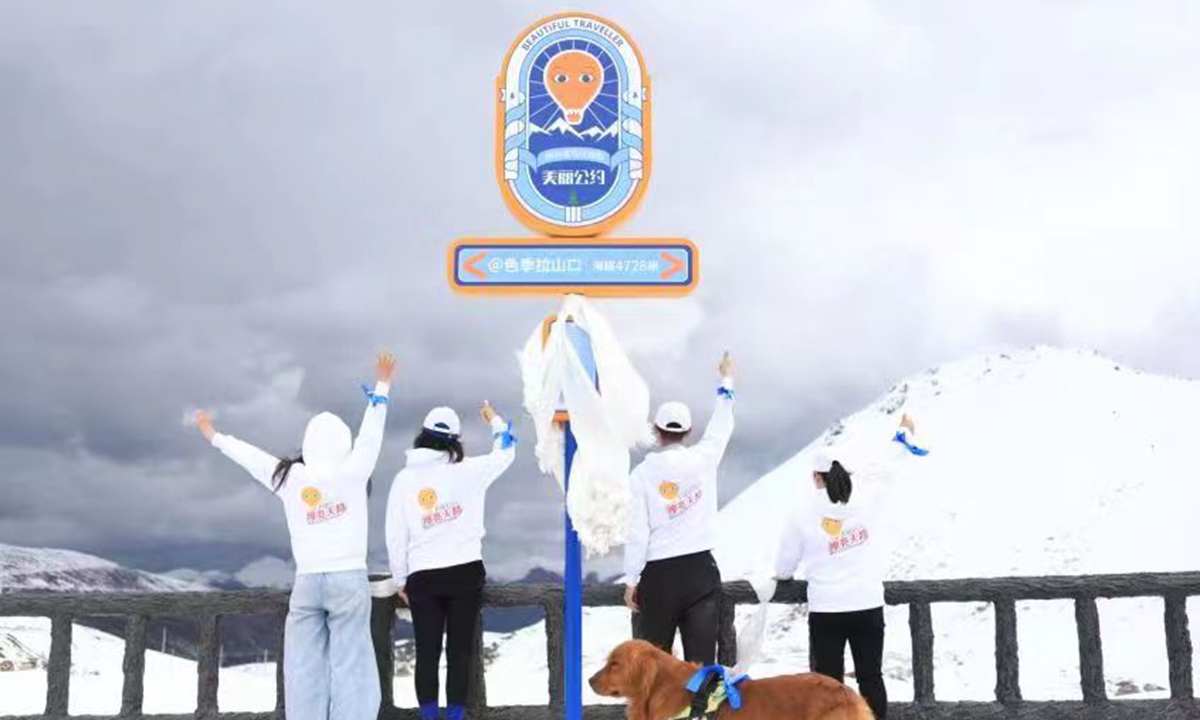 Volunteers clean up trash along the Yarlung Zangbo River in 2021. Photo: Courtesy of Beautiful Travel

A group of people dressed in blue vests scatter up the hill, bending down to pick up rubbish such as plastic bottles left behind by tourists. Suddenly, a Golden Retriever dog rushes into the crowd holding a plastic bottle in its mouth.

This is a routine scene for volunteers from the Chinese charitable organization Beautiful Traveler founded by Shi Ning in 2013. One of the most important goals of the organization is to reduce the waste left behind by tourists in Xizang Autonomous Region in southwest China.

Xizang’s public benefit activity to protect the environment has a beautiful name, Caliang Tianlu, which means cleaning the road to heaven, and has mobilized more than one million people since its launch in 2015.

Shi told the Global Times that volunteers recycled bottles left in snowy mountains, pastures, lakes and rivers to end the problem once and for all, and in October 2021, volunteer service teams were put in place. in place in various areas of Xizang, with approximately 6,000 volunteers working almost daily to sort and recycle more than 40 tons of plastic bottles, or more than 1.5 million bottles.

“Our volunteers have overcome difficulties during the COVID-19 outbreak to come together and do something for the environment in Xizang,” Zhang Haiou, an expert member of the volunteer team, told the Global Times, claiming that she was going to start working on the public interest. activity shortly after passing the interview and becoming one of the volunteers.

The seventh central symposium on Xizang area-related work, held in 2020, emphasized environmental protection on the Qinghai-Tibet Plateau and made it a national and international model of environmental progress.

In response to the call, Shi noted that they had come up with more creative methods to make the work of volunteers more convenient and efficient while educating tourists to realize the importance of protecting the environment of Xizang and reducing the amount of waste at source.

Guardian Angels
“They are the most adorable group of people I have ever seen,” Zhang praised the volunteers she met and worked with.

She said a volunteer from one of the stations brought a golden retriever to join the service team. The dog is like an angel who can quickly pick up the wasted bottles and at the same time can comfort people who feel sick on the set with his beauty.

Many local residents have also joined the volunteers in picking up trash because they want to see a cleaner and more beautiful hometown. Teams of local volunteers carried out 2,000 cleaning operations in 2019 and set up simple sorting stations. Residents find time to help even during the busy agricultural season.

The organization helps them find an efficient way to deal with the waste. They set up garbage sorting stations in villages in Xizang and transport discarded bottles to store them in bundles of up to 500 kilograms.

When they collect 10 tons of bottles, the volunteers transport them to Chengdu, in the province of Sichuan (southwest of China), to put them in the recycling system.

The organization’s volunteers also started in 2018 to wait at tourist places where visitors should go when they arrive in Xizang and provide recycling bags to promote environmental protection.

“The promotion work was able to cover 70 percent of horse and foot tour groups,” Shi said.

They put up billboards at tourist spots in Xizang to inform people not to leave trash anywhere.

Shi and his team believe that one day there will be no more man-made waste in Xizang thanks to these efforts.

We hire! Are you the next social media coordinator for the Detroit Jewish News?