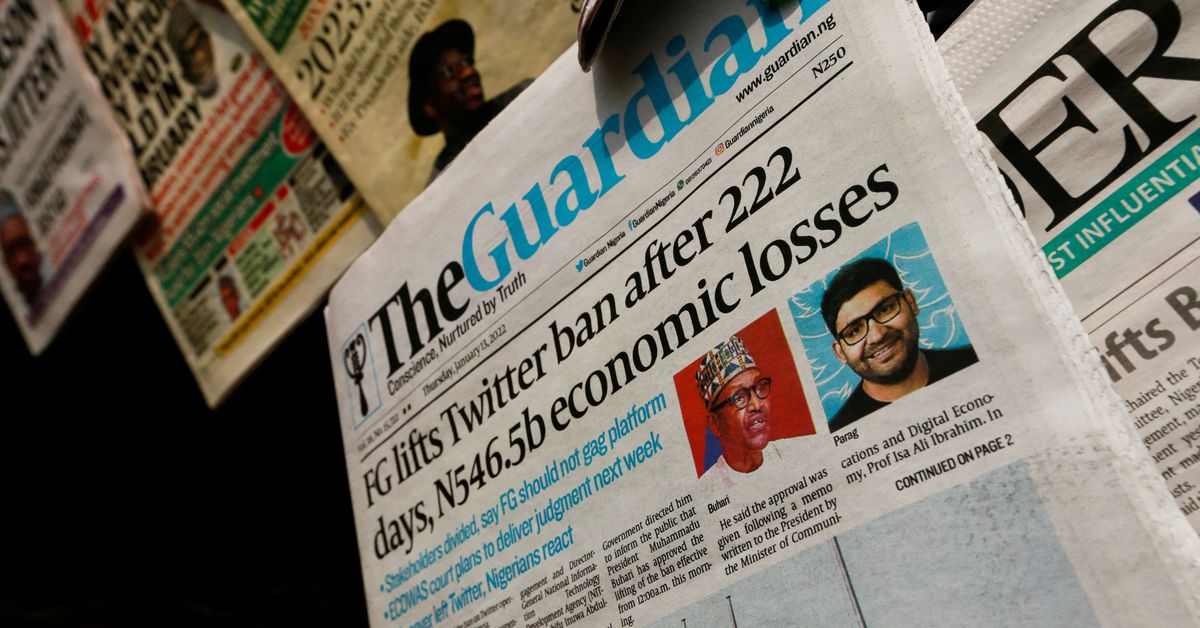 Newspapers are pictured after the Nigerian government announced the lifting of the ban on Twitter in Abuja, Nigeria January 13, 2022. REUTERS/Afolabi Sotunde

ABUJA, Jan 13 (Reuters) – Nigerians on Thursday reacted with a mixture of relief and indifference to the government’s decision to lift the ban on Twitter, saying many residents of Africa’s biggest economy had stayed connected via virtual private networks (VPN).

For model Kingsley Osine, the government’s decision to end the restriction has given Nigerians a voice.

“It didn’t really stop most of us from tweeting, but we were tweeting with fear, you know, but now we can tweet freely, we can express our voices freely,” Osine said.

Announcing the end of the seven-month suspension, the government said on Wednesday that the US social media giant had agreed to establish a local office among other conditions set by the West African nation. Read more

Twitter said it was pleased with its restoration in Nigeria and deeply committed to the country.

“It (the suspension) didn’t really change my social life as I could still interact with a lot of people on Twitter who were using a VPN,” said Benjamin Hon, an Abuja-based musician and content producer.

The Twitter ban, however, has hurt some Nigerian businesses as it has been condemned for its effect on freedom of expression and the ease of doing business in Africa’s most populous nation.

On Twitter, some Nigerians said the move by President Muhammadu Buhari’s government was taken to assuage widespread anger over the ban ahead of elections scheduled for 2023.

Social media should be an important tool in the political campaign before the contest.

The government suspended Twitter on June 4 after it deleted a post by Buhari that threatened to punish regional secessionists. Telecom companies subsequently blocked access to users in Nigeria.

Amnesty International Nigeria welcomed the lifting, describing the ban as an attack on the right to freedom of expression which had deprived Nigerians of “a social media platform that facilitates dialogue and empowers everyone to communicate”.