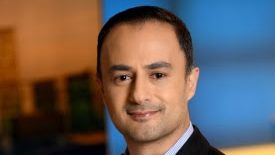 Aslam took the New York job in May 2021, succeeding Chad Matthews, who had been promoted to chief executive of WABC. He was previously vice president of news at KTRK Houston, also part of the ABC-owned group of stations, where he spent six years.

When Aslam was hired, Matthews called him “a proven news manager with an impressive track record of leading and modernizing news teams across multiple platforms at a time when the industry is changing at an extraordinary pace. “.

For his part, Aslam had mentioned dreaming of working in the New York news, calling it “a complete honor to lead the Eyewitness News nation’s #1 station team.

Aslam was diagnosed with glioblastoma months after starting in New York.

“Known for his infectious laugh, warm smile and ability to connect with anyone in conversation, Rehan has inspired each of us to be our best selves and reporters every day,” tells a story on the WABC website. “Rehan was a remarkable person, and everyone who knew him loved him immediately. He was kind, smart and hardworking, and he loved being in the news business. He was – as a prerequisite for working in the industry – ever curious, and his loss is felt in our newsroom and felt by everyone who came in contact with him.