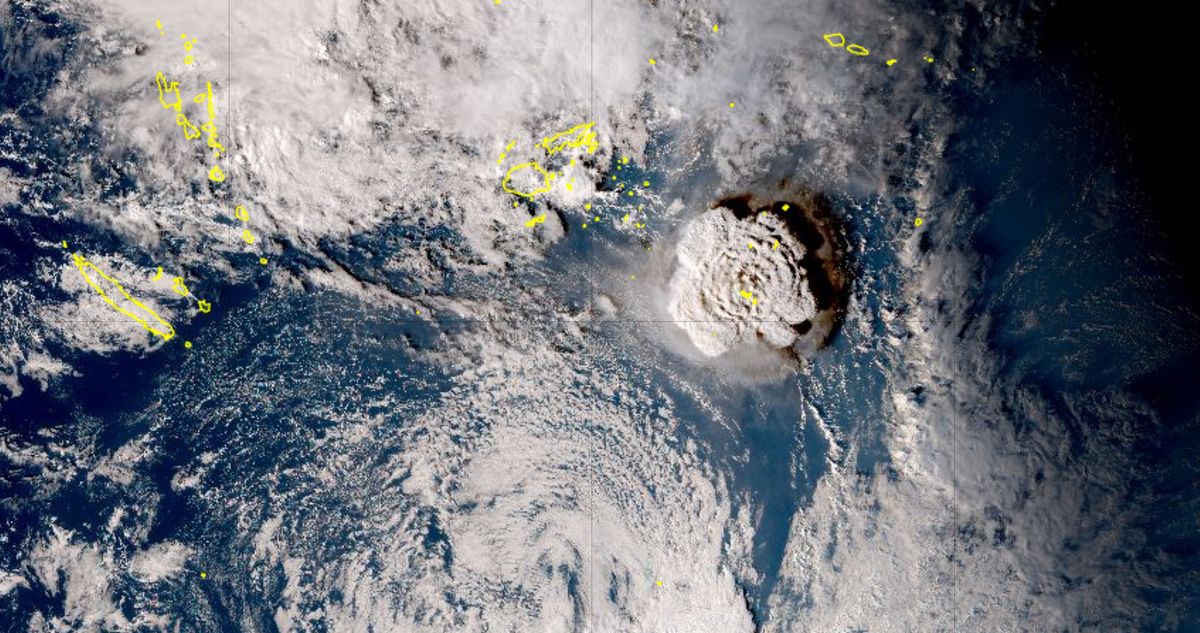 The spectacular eruption of an undersea volcano near the South Pacific kingdom of Tonga generated a tsunami on Saturday that is believed to have hit Tongatapu, the main island of the country’s archipelago, which lies just 40 miles from the volcano . The event also triggered tsunami warnings and advisories for many countries in the Pacific, including Hawaii and the west coast of the United States from California to Alaska.

The Hunga Tonga Hunga Ha’apai volcano erupted on Friday, sending a huge plume of ash up to 20 km into the air, then erupted again on Saturday at 5:26 p.m. local time. The dramatic event and the shock waves it produced were captured by weather satellites:

The violent eruption a few hours ago of the Hunga Tonga-Hunga Haʻapai volcano captured by the GOES-West and Himawari-8 satellites. pic.twitter.com/PzV5v9apF6

Our climate stations recorded a brief spike in atmospheric pressure as the atmospheric shock wave passed through New Zealand. pic.twitter.com/BfLzdq6i57

Atmospheric shock waves from the volcanic explosion are visible in the satellite time lapse. I have never seen anything like it. https://t.co/nGyETUSYgw

When you look at a full disk satellite and something important catches your eye… easily over 700km from central Tonga, an eruption has been heard as far as Fiji. Impressive. #wxtwitter pic.twitter.com/ZLrtFlPaEr

The eruption was reportedly heard across the South Pacific, as far away as New Zealand and Australia. Volcano experts said a shock wave from the eruption moved through the area at something like 600 miles per hour, not far from the speed of sound in air.

It also produced an intense thunderstorm:

Satellite imagery shows that much of the island that had been created by the volcano was destroyed ahead of Saturday’s big event.

Dramatic changes in Hunga Tonga-Hunga Ha’apai captured by @planet from mid-November until this morning, just hours before the last eruption.#TongaVolcano #Tonga #TongaEruption pic.twitter.com/fATanmdIg8

On Sunday, New Zealand Prime Minister Jacinda Ardern said the country had not received any reports of deaths or injuries in Tonga linked to the eruption. Still, Pacific nations and aid groups are struggling to establish communications with the island archipelago. “The tsunami had a significant impact on the foreshore on the north side of [the Tongan capital of] Nuku’alofa with boats and large boulders stranded,” she told reporters. “There are parts of Tonga where we just don’t know yet…we just haven’t established communication.” The UN children’s agency, in coordination with Australia and New Zealand, said it was preparing emergency supplies to travel to Tonga..

It’s not yet known how powerful the eruption was or what long-term impact it might have. Volcanologists have developed a scale that describes the size of explosive volcanic eruptions based on their magnitude and intensity – the Volcanic Explosivity Index, or VEI. Previous eruptions from the submarine volcano near the nation of Tonga were 2. (For context, the 1883 eruption of Krakatoa, which was one of the deadliest volcanic eruptions in modern history, had a IEV of 6.)

But while some experts predicting that Saturday morning’s eruption could be, at least, a VEI of 4, it’s too early to tell. “Until we know how much material has been ejected (made harder by the underwater component), we can’t use scale,” said volcanologist Jess Phoenix. tweeted. “That means that even though we know this eruption is large, we won’t have all the information about it for some time.” Since the eruption is still ongoing, there could be more explosions, cave-ins and tsunamis to come – or it could be for a while.

A tsunami warning was declared for the whole of Tonga following the eruption on Saturday evening. Before communication with Tonga was lost just over an hour after Saturday’s eruption, images and videos of large tsunami waves hitting the coastline and inundating coastal communities were shared on social media. The extent of the damage in the country, home to some 105,000 people, remains unclear.

This family was in church. They had just finished practicing choir and the tsunami hit 😩❤️🇹🇴 pic.twitter.com/DLLFRJ9BAc

Radio New Zealand reported that King Tupou VI of Tonga was evacuated from the royal palace after the tsunami inundated the capital Nuku’alofa.

Surreal look at these images of the house. In #Tonga… the red and white building in the background is the Royal Palace… the bank one of the main banks in the capital.. #TongaTsunami #TongaVolcano #disaster pic.twitter.com/4ZzgAdn2xG

The impact on other countries, including the United States
Tsunami warnings have been issued in Australia, New Zealand, Japan and other Pacific countries. New Zealand’s National Emergency Management Agency said parts of the country could expect “unusual strong currents and unpredictable surges on shore following a large volcanic eruption”.

Tsunami advisories were also issued for Hawaii and the west coast of the United States on Saturday morning. In the Hawaiian Islands, the waves ranged from one foot to just under three feet. “We are relieved that no damage was reported and only minor flooding on all islands,” the Pacific Tsunami Warning Center said. noted, before canceling the tsunami warning based in Hawaii. On Twitter, a user created a depiction of the pressure wave associated with the Tonga eruption as it swept across the United States today.

15-minute pressure altimeter change via ASOS NWS/MADIS 5-minute interval data. Shows the shock wave of the #Tongaeruption , feel free to use it as you see fit. pic.twitter.com/P31Aq1SYku

The tsunami also caused minor flooding in California, prompting authorities to temporarily close several beaches and arenas from Orange County to the Bay Area. “If you find yourself in this coastal area,” the National Weather Service said, “stay away from the beach and harbors and marinas. Do not go to the coast to watch the tsunami. Pay attention to the instructions of your local emergency officials.

Another huge wave in the inner harbour. Bigger than the first. #SantaCruz pic.twitter.com/gzzBmrq9dh

Waves of one to three feet were expected along the Oregon Coast:

Daily news about politics, business and technology shaping our world.


By submitting your email, you agree to our Terms of Use and Privacy Notice and consent to receive email correspondence from us.