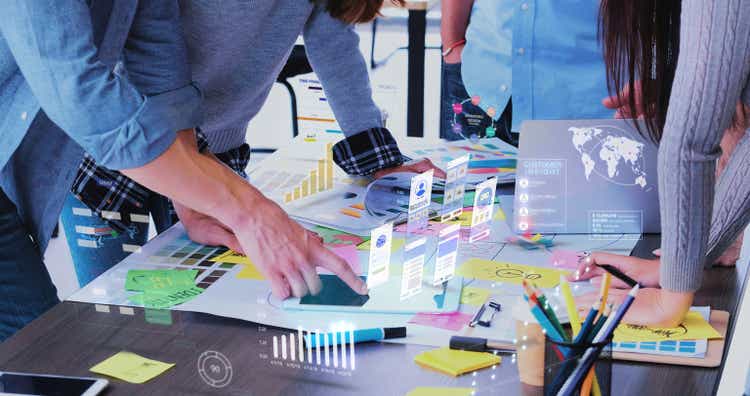 The Trade Desk (TTD) is a leader in programmatic advertising. The company runs a software-based marketplace that connects digital ad buyers (businesses) to content publishers (blogs and websites).

The online advertising market is dominated by two main players Alphabet (Google Ads) (NASDAQ:GOOG) (NASDAQ:GOOGL) and Meta (Facebook) (NASDAQ:FB). Google has a 40% market share, but The Trade Desk is growing rapidly and has now reached an 8% market share. Online reviews now rank The Trade Desk higher than Google Ads, so this small business could have a big avenue for growth ahead of it.

The company’s stock price is down 47% from its November 2021 highs, so now could be a great time to open a position in this disruptive company. In this article, I’ll dive into the business model, finance, and valuation.

In traditional advertising, ad buyers would have had to contact and negotiate individual contracts with each website publisher in order to display content. It was a long and expensive process. While programmatic advertising allows bidding on ad placements in a marketplace style. Then, artificial intelligence is used to optimize the ad budget across all placements.

The global programmatic advertising market is expected to reach $150 billion by 2023, growing 22% annually, according to data from Market Research Future.

According to reviews and my analysis, The Trade Desk offers a targeted approach to cross-media ad buying through display advertising on publisher websites, connected TV, and even integration with the popular social media platform. Tik Tok.

The company uses its artificial intelligence (AI) engine to best optimize ad spend. The user interface is simple and offers plenty of third-party integrations. While Google Ads has quite clunky and complex user interface which takes some time to learn. Moreover, they offer a single unique ID that can monitor the same users across all devices and publishers on the internet.

The Trade Desk makes it possible to define the quality of advertising placements and to have direct access to premium publishers. Premium publishers include: Conde Nast, Reuters, The Washington Post, BBC.com, USA Today and more. Direct access to premium publishers is really important because sometimes an advertiser won’t know exactly which websites their ads are showing on, which has led to disturbing statistics that around 15% of all ad spend is “lost” via fraudulent websites or simply invisible advertisements, according to a LinkedIn study.

To combat “fake news”, Google has ranked “premium websites” higher and given them more authority, for example in the recent algorithm update “YMYL (Your Money, Your Life) from Google focuses on ranking premium finance and healthcare websites high, above unproven and newer websites.

For example, in the first quarter, the company announced a partnership with Walmart (NYSE: WMT) to launch a new DSP (Demand-Side Platform) that gives advertisers access to unique data about Walmart shoppers. This allows for a granular, data-driven approach to advertising, which is revolutionary.

The love of Trade Desk by its customers is recognized by their very high retention rate of 95%, which the company has managed to maintain over the past 8 years. It could also be attributed to advertisers’ familiarity with the platform and their reluctance to switch providers if they uploaded their own proprietary data.

Gross ad spend on the platform reached $6.2 billion, a 47% year-over-year increase. The company operates with a high adjusted EBITDA margin of 42%, compared to 34% the previous year, to give an adjusted EBITDA of $500 million.

“Adjusted EBITDA” adds stock-based compensation which is the largest expense at $205 million in 2021. Without these adjustments, the company’s pretax operating margin is 19%, or $125 million. dollars on $1.2 billion in revenue for 2021. Personally, I think “true” margins are better for analysis because equity compensation is still an expense!

The good news is that the company has zero interest bearing debt, which is fantastic and $680 million in cash.

In order to value Trade Desk, I incorporated the latest financial data into my valuation model, which uses the discounted cash flow valuation method.

I made a very optimistic valuation predicting 30% revenue growth for the next 5 years, at the upper end of analyst estimates. Additionally, expect margins to increase by 6% over the next 3 years.

Plugging in these numbers I get a fair value of $36/share, the stock is currently trading at $56/share and is therefore 61% overvalued even with optimistic projections.

Analyzing the company’s EV to EBITDA, this sits at a very high 43, but surprisingly for this historically cheap stock.

Comparing the company relative to other advertising agencies, it is also the most expensive. For example, Meta Platforms, which still derives the majority of its revenue from advertising, has an EV/EBITDA of just 7 compared to Trade Desk’s 43.

The Trade Desk faces fierce competition from Google, which is the dominant player in display advertising, in addition to owning YouTube, the world’s most popular online video platform. Then there is Meta which owns (Facebook, Instagram, WhatsApp) the most popular social media platforms in the world.

Now although TikTok is a Trade Desk partner and I personally think it would be more profitable for advertisers to just advertise directly on TikTok. This would take longer, but would make more sense for budget-conscious advertisers. Other more industry-specific competitors include Adobe Advertising Cloud and Mediaocean.

The Trade Desk is a leading player in the programmatic advertising industry, the firm offers a solution that according to reviews is easier to use and more advanced than its rivals. The company has grown its revenue very quickly over the past few years and has zero debt, which is great to see. However, the valuation is very high (61% overvalued on my DCF model) and an EV/EBITDA of 43 which is higher than competitors. The only consolation is that the EV/EBITDA is “cheap” compared to historical figures. Overall, I like the company, its partnerships, and its product offering, but the valuation is far too spicy, especially given current growth stock valuations, with a lot of big tech (Meta, Alphabet ) at very reasonable prices.

Video will play key role in hearings and January 6 report