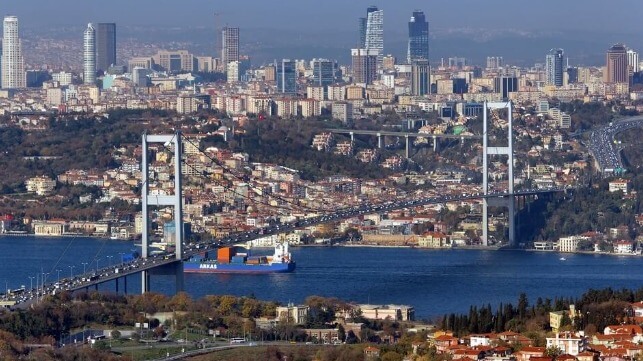 Turkey takes a first step towards closing the Bosphorus to Russia


On Sunday, the Turkish government began calling Russia’s invasion of Ukraine a “war,” a designation that invokes its legal authority to close the Bosphorus to warships.

“On the fourth day of the war in Ukraine, we reiterate President Erdoğan’s call for an immediate halt to Russian attacks and the start of ceasefire negotiations,” Turkey’s presidential spokesman said in a statement on Sunday. social media post. “We will continue our efforts to help the Ukrainian people and end the bloodshed in this unjust and illegal war.”

On the day the invasion began, Ukraine asked Turkey to exercise its right under the Montreux Convention to close the strait to combat ships. On Friday, the Turkish Foreign Ministry said the Convention does not allow it to close the Bosphorus to Russian ships returning to their home ports, and so a closure would have no effect.

Sunday’s announcement seemed to mark a reversal of that policy. “It’s not just a few airstrikes now, the situation in Ukraine is officially a war,” Turkish Foreign Minister Mevlut Cavusoglu said in an interview with CNN Turkey. “We will implement the Montreux Convention.”

The Montreux Convention of 1936 grants Turkey jurisdiction over traffic on the Bosphorus and the Dardanelles. On a day-to-day basis, it limits the movements of certain warships to and from the Black Sea – including submarines and aircraft carriers. The convention also allows Turkey to close the waterway to military vessels in times of war.

If the Turkish government exercises this authority, the effects may not be felt immediately in the conflict zone. Russia repositioned the amphibious assault assets of its Baltic and Northern Fleets to the Black Sea prior to the invasion, and its amphibious task force was reportedly used to land troops near Mariupol. Additional forces are on standby in the eastern Mediterranean, including two Slavaclass missile cruisers.

We’re Only Human: 4 Ways to Become a Better Editor