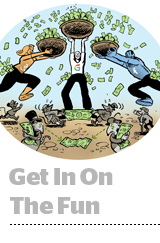 Why non-advertising businesses are getting into advertising

Instacart was Amazon’s fast fan of advertising. That’s not much of a surprise, considering that it works with many of the same retail marketers who put their promotional budgets online, rather than coupon campaigns and in-store displays. Instacart has also hired Amazon ad technology leader Seth Dallaire as a CRO.

Instacart’s financial information is not public, but the company lost over $ 300 million in 2019 and had its first profitable month last April, when so many new customers tried online grocery shopping during quarantine. , The Information reported last year. But even with the unexpected increase in orders, Instacart only made a monthly profit of $ 10 million; and since thousands of additional delivery people had to be hired to meet demand, this profit figure was not sustainable without additional investment.

Instacart has raised more than $ 2.7 billion from venture capitalists, but it’s an extension of the retail grocery store, known for its high costs and low margins. Products often have a profit margin of only a few percentage points. Unlike the easy scalability of a software platform, Instacart has to hire workers to meet sales growth. To increase sales, Instacart must either convert new customers or replace more and more store visits. But acquiring and retaining users is a costly proposition right now.

Uber is a prime example of a business with high potential advertising revenue, but also immense risk.

The Uber app is one of a selected group with near universal user options for location tracking. The company knows if they’ve dropped someone off at a mall, movie theater, or hotel, for example, which could be a powerful targeting and attribution engine (pardon the pun).

Uber’s advertising business is currently narrow, but significant. CEO Dara Khosrowshahi said the company is poised to earn $ 300 million in advertising revenue this year. It’s real money (BuzzFeed made $ 320 million in 2020, according to its pre-IPO filing, for comparison), but it’s mostly from the food delivery app Postmates and the launch of Uber Eats, as restaurants pay for placement in apps.

Uber’s other advertising offering comes from the physical signage that drivers can place on their vehicles. And last month, it started testing display ads for the first time in its main ridesharing app.

â€œNon-traditional platforms that enable ad networks should not interfere with their user experience. Apps like Uber and Instacart have a very specific use case in people’s lives that it’s best not to be interrupted by standard ads, â€he said.

Waze, the Google-owned mapping app, also experimented this year with in-app advertising opportunities that don’t trip users accustomed to an ad-free experience. A Nissan campaign gave users the option to change their car icon in the app to Pathfinder, as well as integrated marketing content if people were driving in certain places (off-road terrain and scenic roads).

This is a route for Uber. Although with Grether, former COO of Xaxis and CEO of Sizmek, in charge of the advertising business, Uber could consider expanding into programmatic and data-driven advertising.

â€œBrands will always seek out audiences where they are most receptive to their messages. However, just because a platform has a well-sized, highly engaged user base doesn’t mean that its users will welcome a sudden onslaught of ads, â€said Proulx.

BNPLs are another category of digital brands that have decided to cross the Rubicon in advertising.

The temptation is quite clear. With purchase histories and credit information, BNPLs are in a good position to sort and target users based on whether they are buyers of luxury goods, have high disposable income, or, for example, are filling a new home with furniture. They can also assign based on purchases, the same way Amazon or Instacart come full circle and claim credit on sales.

BNPL companies acquire users at a loss and must offset this income over time. And they face a cash shortage as they lend out large sums which are collected in small installments. Affirm and Afterpay, two state-owned BNPL companies, lost between $ 150 million and $ 250 million in the second quarter of this year alone.

Advertising is the liquidity solution.

Afterpay’s advertising product will begin with an affiliate model, co-CEO Nick Molnar told investors in a earnings report last month. In other words, retailers will be able to rely on the content and messaging of Afterpay users to deliver products.

â€œIt will certainly be possible to expand this advertising platform over time to reflect a more traditional platform,â€ Molnar said.

Afterpay’s advertising platform is also a boon to its retail and brand partner businesses. Afterpay customers are people making purchases, but retailers and merchants must agree to integrate the BNPL service as a payment option into their online shopping system. Molnar told investors that advertising, and in particular the ability to re-engage users who have made a purchase, is an important feature in attracting and retaining retailers.

From Uber to Instacart to BNPL, these new companies and categories aren’t the only examples of ads showing in new places.

Mobile banking customers may be surprised to find promotions appearing in their financial apps powered by Cardlytics. Not to mention Walgreen’s refrigerators and freezers displaying ads on screens. Or, God forbid, the Tesla satellite broadcasting commercials into empty space.

Tesla has made consistent profits over the past two years. And his near-Earth orbiting DOOH display panel is a joke, not a money generator. But as with jokes, it’s funny because it’s partly true.

If ever Tesla slips below profitability or faces a financial sustainability crisis. Will it reduce staff and reduce operations? May be.