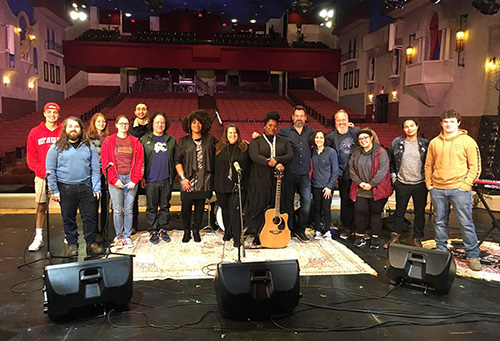 WKU PBS, the public television service of WKU, was nominated for awards in four categories for the 57e Annual Ohio Valley Emmy Awards.

The nominations include the first two of a WKU PBS collaboration with WKU Athletics. WKU student Logan Fry and Josh Thomson are nominated for the first time.

Four others – Darius Barati, Jeff Petrocelli, Hannah Wilcutt and Neil Purcell – are nominated for their work on Lost River Sessions, a series that explores the music scene from its roots by featuring musical talent from the Folk, Bluegrass and Americana genres performing intimate concerts in various iconic venues in south-central Kentucky.

â€œWe strive to cultivate an environment where creativity and hard work can thrive in ways that benefit the communities we serve,â€ said Jordan Basham, WKU PBS Production Manager. â€œThe recognition from our peers, provided in the form of these appointments, serves in part as recognition of these efforts. We find validation in our workforce development efforts through the success of our team of students on projects like these and the contributions they make to our operation on a daily basis.

WKU PBS has received the following nominations for the Ohio Valley Emmy Awards:

â€œIt is an honor to continue the strong tradition of creating relevant and powerful content within our community while training the next generation of broadcasters and filmmakers that is the foundation of WKU PBS,â€ said Barati, Producer / Director . â€œAlthough 2020 was not the year we expected, I am proud that we were still able to evolve and adapt to produce work that lives up to our standards of excellence. “

Fry and Thomson said they were honored to be nominated for the first time at the Emmy Awards.

â€œIt has been a joy to serve WKU athletics,â€ said Fry, Creative Content Producer. â€œThe powerful and inspiring stories we share every day are a constant reminder of why WKU is such a special place. It is an honor to receive my first Chapter nomination. I have David Dowdy and Randy Herndon of Calloway County High School in Murray and all the staff at WKU PBS for investing in my education and fostering a spirit of curiosity, passionate storytelling and an endless pursuit of self-improvement. .

Thomson, a student crew member, said: â€œIt is an honor to be nominated for such a prestigious award at such a young age. It wouldn’t have been possible without Logan Fry. I could not have asked for a more educated and accessible mentor. I never had a question he couldn’t answer and the impact he had on developing my skills is priceless. I loved working for WKU PBS and being able to tell people never before seen stories and connecting people through my images on a daily basis is something I will never take for granted.

The recipients will be announced on August 15 in a virtual ceremony. WKU PBS has been nominated in each of the past 18 years, receiving 28 awards.